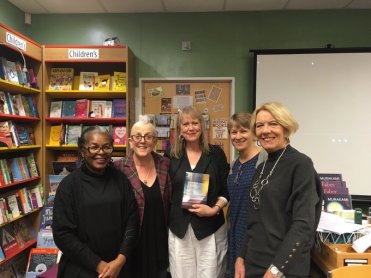 ‘Fully booked’ that’s just how I like it!  Days before the launch of Clever Girls, edited by Jackie Goode and featuring a chapter contribution from me, tickets were SOLD OUT. The launch took place at Five Leaves Bookshop on Thursday, 30th January 2020, a great way to start the new year. It was moving listening to my Clever Girl crew talk about  overcoming obstacles. That’s Dr. Jackie Goode in the centre holding the anthology, published by Palgrave Macmillan.

There months prior to the launch I had the pleasure of opening NTU Creative Writing Hub’s first ever event on 1 October 2019, at Five Leaves Bookshop. Helen Tookey headlined with Hannah Cooper-Smithson, and Lauren Terry also supporting alongside me. Nottingham Creative Writing Hub is the central place for writers at Nottingham Trent University, hosted by the Department of English, Philosophy and Communications.